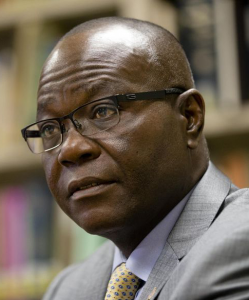 His Excellency Jeremiah C. Sulunteh is a prominent Liberian politician, administrator and professor. His career in the areas of administration, teaching, and politics spans more than 30 years.

Due to his hard work, dedication to duty and patriotism to his country, Ambassador Sulunteh has risen through the ranks, from a humble beginning as senior commercial aide at the Bong County Agriculture Development Project in Bong County, Liberia, in 1981.

Since then, other positions he has occupied include the following: project coordinator, Friends of Liberia, 1995 to 1997; accounts service representative, Royal Bank of Canada, 1998 to 2000; financial aid advisor, York University, Canada, 2000 to 2002; and associate vice president for Planning and Development, Cuttington University, Liberia, 2002 to 2005.

Following her inauguration as Liberia and Africa’s first democratically elected president in 2006, Her Excellency Madam Ellen Johnson Sirleaf was pleased to appoint Sulunteh as minister of Transport from 2006 to 2008. He also served as minister of Post and Telecommunications from 2008 to 2010, and as minister of Labor from 2010 to 2012.

Due to his wealth of experience and proven service, President Sirleaf was once again pleased to appoint Sulunteh as ambassador extraordinary and plenipotentiary of the Republic of Liberia to the United States of America in 2012.

Biography courtesy of the Liberian Embassy and Georgia Gwinnett College